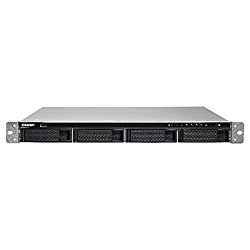 The TS-463U-RP is a powerful network storage system powered by a high-performance AMD quad-core processor. It uniquely provides 10GbE at a budget price to maximize ROI, and doubles the encrypted file transfer performance with the AES-NI hardware-accelerated encryption engine to over 800 MB/s. Powered by the QTS operating system, the TS-463U-RP provides versatile all-in-one server functionalities as well as unique features including Virtualization Station, which allows users to run VMs on the same device. The TS-463U-RP is designed for small and medium-sized businesses looking for backup, restoration, private cloud, storage for virtualization, and to future-proof their IT infrastructure for 10GbE networks.