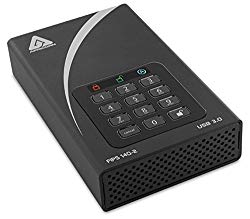 The perfect desktop storage innovation for your most sensitive information, the Padlock DT FIPS delivers the ultimate data security in a wide variety of storage capacities. Software-Free, 100% hardware-based 256-bit AES XTS encrypted, onboard keypad PIN authenticated, and ultra-fast USB 3.1 (3.0) data transfer speeds. All Data is encrypted on the fly and the device’s PINs and Data remain encrypted while the drive is at rest. Completely cross-platform compatible and OS agnostic; the Padlock DT FIPS thrives with Windows, Linux, Mac, Android, and Chrome. It also thrives where software-based encrypted devices can't function such as embedded systems, diagnostic machinery, and equipment in possession of a powered USB port and storage file system. All internal componentry is protected from physical tampering with a layer of hardened epoxy, and its firmware is locked down, preventing any modifications which make it immune to malware attacks such as Bad USB. Aegis DT FIPS is also Configurator compatible. The Configurator is a Windows-Based App that Quickly Sets Up Multiple Devices Simultaneously. Create custom profiles and mass configure multiple devices in a matter of seconds using the Aegis Configurator. To configure an expanded number of devices, use the Powered Aegis Configurator Hub bundle.